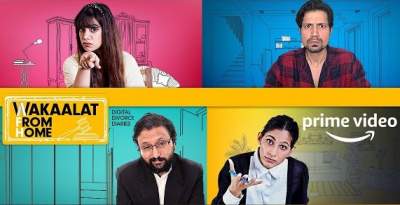 When you look at this show, it’s something you’d immediately want to see. For starters, you know it’s relatable because it’s Wakalat From Home (WFH) and this is something we’ve all accepted as the new norm since almost everyone has moved to a work from home situation. Additionally, the web-series which released on 10 September on Amazon Prime Video has a lot of known names involved.

Having directed 4 Bollywood films like Kuch Naa Kaho (2003), Bluffmaster! (2005), Dum Maaro Dum (2011) and Nautanki Saala (2013), Rohan Sippy is the producer of the show along with his father Ramesh Sippy and when there are known producers involved, the expectations are higher. Similarly, we have names like Kubbra Sait and Gopal Datt in the cast.

The one thing we’ve missed right through this lockdown is relatable content and that’s exactly what this show has tried to give us. All of us are busy with our Zoom calls and working from home and now, there’s this show made post pandemic and gives us situations we’re all used to seeing in the lockdown. The plot is basically a married couple (Sumeet Vyas, Nidhi Singh) filing for divorce while Datt and Sait play the lawyers of the couple!

In fact, the entire season revolves around accusations made to and fro between the husband and wife, and the lawyers trying to solve them in a humourous manner. We’d even go a step ahead and imagine and that the shooting for the same could even have been done in remote locations, keeping up with norms of the pandemic and the nationwide lockdown.