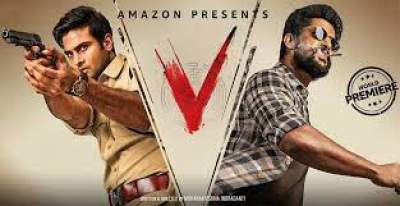 DCP Aditya, a celebrated cop, handles a communal riot in Hyderabad. He is awarded a gallantry medal a year later, for solving various cases. The following night, Prasad, an Inspector, is grotesquely murdered by an unnamed killer who leaves a note challenging Aditya to catch him. Aditya suspects Apoorva, an aspiring crime novelist who he met the previous night, to have some link with the killer as she was in contact with Prasad. However, Apoorva only met Prasad for her research, during which she overhears Prasad telling a realtor named Mallik that their lives are under threat. Meanwhile, the killer calls Aditya, challenging him to prevent four more murders, failing which he shall give up his medals and resign. Aditya accepts the challenge.

On deducing that the killer’s name starts with “V”, Aditya arrests a person Vicky, based on the history between him and Prasad. Vicky tells Aditya about a man who enquired about Prasad and Mallik. On knowing Mallik could be the next target, Aditya rushes to save him, only to see that he is already killed. Killer this time leaves a clue hinting next location of the target. Aditya and Apoorva crack the clue and Aditya heads to Mumbai. There, the killer escapes narrowly, upon killing his target. He later sends Aditya an image of Aditya’s school days, which makes Aditya suspect Vishnu, his fellow schoolmate, and a popular student-athlete. He learns from his school in Vizag that Vishnu is an ex-Army soldier with an impeccable record of eliminating terrorists. Aditya visits a colleague of Vishnu who tells their past.