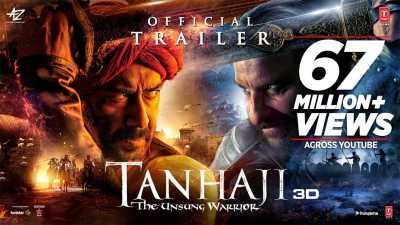 Bollywood and its love affair with historical heroes has given us many films in the recent past. While films like Padmaavat and Jodha Akbar made us feel awed of our grand and magnificent history, cinematic experiences like the recent Panipat compelled us to question the filmmaker’s motive behind making such films.

Ajay Devgn and Kajol’s film Tanhaji: The Unsung Warrior falls in the second category. Based on the life of Maratha warrior Tanaji Malusare (stylised as Tanhaji in the film), who was the Subedar in the army of Maratha king Chhatrapati Shivaji Maharaj, the Om Raut directorial film is an exaggerated and slow-paced ode to the great warrior.

It is the 17th century when Mughal emperor Aurangzeb (Luke Kenny) is ruling the northern parts of India from the banks of Yamuna. He aspires to expand his empire down South by defeating the Marathas, who are determined to bring back Swarajya under the leadership of Chattrapati Shivaji Maharaj.

Aurangzeb, the shrewd Mughal emperor also known by his regal name Alamgir, sets a Rajput General, Mirza Raje Jai Singh, against the Marathas. To save his people and his kingdom, Chhatrapati Shivaji Maharaj (Sharad Kelkar) surrenders 23 of his forts, including the Fort of Kondhana, under the treaty of Purandar.

The Fort of Kondhana has a strategic importance through which Aurangzeb wants to rule the southern part of India. Four years after capturing the fort, the Mughal emperor sends his Rajput fortkeeper Udaybhan Singh Rathod (Saif Ali Khan) with a special cannon, named Naagin, which has the calibre to destroy an entire fort. The Marathas plan a muhim (campaign) to recapture the Fort of Kondhana and are led by Tanaji Malusare (Ajay Devgn) in this struggle.