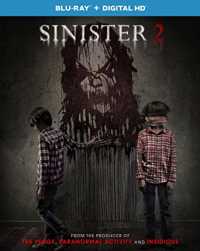 Sinister 2 is a 2015 American supernatural horror film directed by Ciaran Foy and written by Scott Derrickson and C. Robert Cargill. The sequel to the 2012 film Sinister, the film stars James Ransone, reprising his role from the original film, and Shannyn Sossamon as a mother whose sons are tormented by the ghostly children taken by Bughuul at their rural farmhouse. The film received a nationwide release on August 21, 2015. The film grossed over $54 million against its reported budget of $10 million.