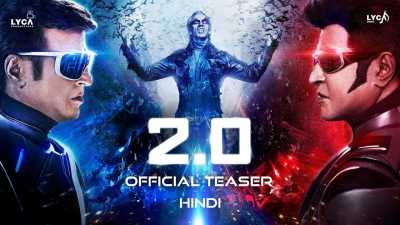 2.0 is a 2018 Indian Tamil-language science fiction action film written and directed by S. Shankar. Produced by Subaskaran under the banner Lyca Productions, the film is a sequel to Enthiran (2010), featuring Rajinikanth reprising the roles of Dr. Vaseegaran and Chitti, alongside Akshay Kumar and Amy Jackson. Sudhanshu Pandey, Adil Hussain, Kalabhavan Shajohn, and K. Ganesh appear in supporting roles.

The film follows the conflict between Chitti, the once dismantled andro-humanoid robot, and Pakshi Rajan, an ornithologist who seeks vengeance on smartphone users to prevent avian population decline. The soundtrack is composed by A. R. Rahman, with lyrics written by Madhan Karky and Na. Muthukumar.