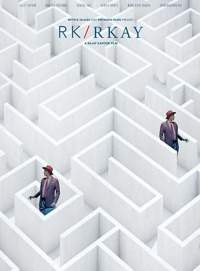 You can either be sentimental or sour about the films, but you could not often charm humans with the aid of being each right away. Unfortunately, the people in the back of the Indian moviemaking comedy “RK/RKAY” took that threat, and wound up making a mawkish, inert delusion approximately a filmmaker whose protagonist escapes his film inside the film. Writer/director Rajat Kapoor stars as both RK, a beyond-his-high filmmaker, and Mahboob, a guileless refugee from a Nineteen Fifties-fashion melodrama. RK and Mahboob have some coronary heart-to-hearts and train each other how to stay higher … In principle, at least.

In “RK/RKAY,” Kapoor regularly seems as tired and bemused as his popsicle protagonists, all of whom have reviews, but none of whom recognize what to do with them. I clearly desired to root for “RK/RKAY”—it’s a actual-life hard work of affection, having been crowdfunded for much less than $500,000—however I can’t really suggest a film whose creators’ mentioned affects encompass “The Purple Rose of Cairo,” however whose tone-deaf speak and blasé filmmaking resemble “Hollywood Ending.