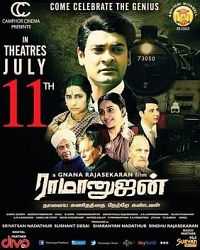 Ramanujan is a 2014 biographical film based on the life of renowned Indian mathematician Srinivasa Ramanujan. The film written and directed by Gnana Rajasekaran, was shot back to back in Tamil and English languages.[1] Ramanujan has been produced by the independent Indian production house Camphor Cinema. The cast consists of South Indian and British film, stage and screen personalities. It marks the film debut of Abhinay Vaddi, the grandson of veteran Tamil film actors Gemini Ganesan and Savitri, as the main protagonist.