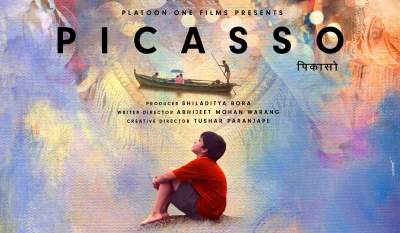 The Marathi movie Picasso is, by its own admission, a tribute to performers, singers, and artists, and specifically those involved in Dashavatar, folk theater practiced around South Konkan in Goa and Maharashtra, mostly in and around temples, and mostly by men. This tribute isn’t just lip-service to give the film a heft in the epilogue that it couldn’t muster in its run-time; the entire second-half of the film is set in and around the Dashavatar stage, with us, being both audience to the film and the stage performance.

The brief, 70 minute film follows Gandharva Gawde (Samay Tambe), studying in the 7th Standard, who is selected for the National level of the Picasso Arts Scholarship. He needs to cough up 1500 Rupees to participate in the Nationals. If he wins the scholarship, he gets to study at the Picasso Museum in Barcelona for a year. Years ago, one of the students from his school had won it, and had gone on to study and graduate as an artist from the JJ School Of Art in Mumbai. This is, thus, not unchartered territory, but it certainly is a swerve for him and his family. His mother needs money for medical tests to diagnose a pain, and his father is an artist, a Renaissance man — a musician, a painter, a sculptor, an actor — who constantly brushes up against his poverty and circumstances as the bread-winner. The tension of the film, set over a day, is to see if Gandharva and his family can get the money. It isn’t interested in asking questions beyond that, happy with a temporary solution to an immediate, specific concern, instead of a definitive, generalized happily-ever-after.