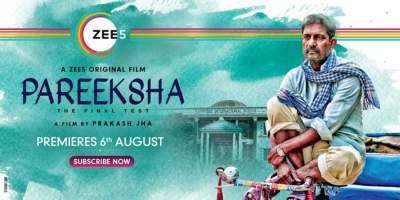 Pareeksha movie review: An underdog-as-winner is an always-in-demand subject; a little less exposition would have made this well-intentioned film better.

Based on a real-life story, Pareeksha is about a rickshaw puller in Bihar whose desire to see his son attend the city’s best English-medium private school, surmounts all else. And while the treatment is linear, often taking a simplistic hop-skip-jump over tough problems to reach its message-y end, it toplines hope: if one poor man’s child can break into the privileged sanctum of expensive education which will lead to a better life, so can many others.

Buchchi (Hussain) has been ferrying children to Sapphire International school for several years, while his own son Bulbul (Shubham) goes to a government school. That he is Dalit is not explicitly stated, but his address is ‘Ambedkar Colony’, where he lives with his wife Priyanka (Bose, effective) and super-bright son: the ‘pareeksha’ is not just the several exams his son has to pass to first get into the English medium school and then be able to write the life-altering CBSE board exams, it’s also a test of how far Buchchi will go to facilitate that dream, while Priyanka supplements the meagre family income with an exacting assembly-line job in a local factory.