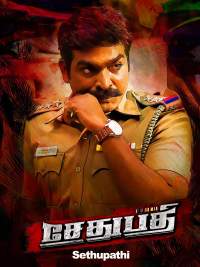 Sub-Inspector Subburaj, who is on night rounds in his C3 Station limits, is lured into a trap and burnt to death by a group of henchmen. Despite being burnt inside his station, he stumbles across a small bridge and dies inside C4 Station’s limit. This causes tension to the planner of the attack.

Sethupathi (Vijay Sethupathi) is the police inspector of C4 Station in Madurai who is awaiting his confirmed promotion to ACP. Subburaj’s case is given to him. Sethupathi finds out that an influential don and politician, Vaathiyar (Vela Ramamoorthy) of Melur, is behind the murder. Kanagavel is married to Vaathiyar’s daughter, but the marriage is unhappy. Therefore, Vaathiyar had decided to kill Kanagavel. Kanagavel was off-duty due to minor injury on the day he was supposed to be murdered, and Subburaj, who was attached as Crime SI in same police station, was filling in for him. Sethupathi arrests Vaathiyar during a temple festival and forces him to travel to Chennai to apply for bail, earning his enmity.

Later, Sethupathi interrogates two adolescent schoolboys who had sold a stolen chain which was lost in a chain-snatching attempt. When they do not speak up, Sethupathi threatens to shoot them on the count of five, albeit using a non-glocked gun. At the fifth count, he accidentally shoots one of the boys in the neck when the other tries to flee, leaving him critically injured. Sethupathi is charged with attempt-to-murder and is suspended.