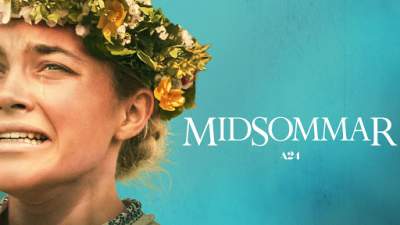 Psychology student Dani Ardor is traumatized after her sister Terri kills herself and their parents by filling their home with carbon monoxide. The incident strains Dani’s relationship with her emotionally distant boyfriend, cultural anthropology student Christian Hughes. She later learns that Christian and his friends Mark and Josh have been invited by their Swedish friend Pelle to attend a midsummer celebration at Pelle’s ancestral commune, the Hårga, in Hälsingland. The celebration occurs only once every 90 years and Josh, also an anthropology student, wants to write his thesis on it. Christian hid the trip from Dani, wanting to break up with her before leaving, but invites her along after she finds out about it, although he does not think she will actually come.

The group flies to Sweden and arrives at the commune, where they meet Simon and Connie, an English couple from London who were invited by Pelle’s communal brother Ingemar. He offers the group psychedelic mushrooms, and Dani has hallucinations of Terri while under the drug’s influence. Pelle gives Dani a drawing for her birthday, and pulls Christian aside to remind him when Dani unintentionally reveals that Christian forgot.

Later, the group witnesses an ättestupa, a tradition which sees two commune elders attempt to kill themselves by leaping from a cliff onto a rock. When one of the elders survives the fall, the commune members mimic his wails of agony and crush his skull with a mallet, while commune elder Siv attempts to calm Dani and her friends by explaining how it is normal for every member to do once they reach the age of 72. The scene deeply disturbs the group of visitors, but they decide to stay long enough for Josh to finish his thesis.