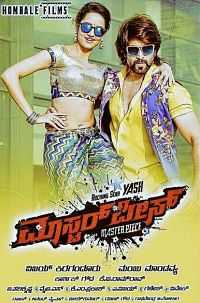 Masterpiece (stylized as Master Piece, Kannada is a 2015 Indian Kannada action-thriller film written and directed by Manju Mandavya. It stars Yash and Shanvi Srivastava in the lead roles. The supporting cast features Suhasini Maniratnam, P. Ravi Shankar and Chikkanna. The film was released on 24 December 2015. Though the posters depicts Yash in Bhagat Singh costumes, the movie is not about the life history of Bhagat Singh.One portion of the film sees me as Bhagat Singh, but that does not make it a historic film. It is a pakka commercial film”, says Yash in an interview.