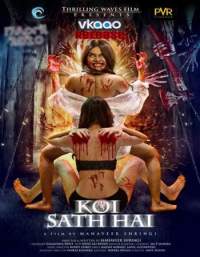 Director Mahaveer Shringi has penned the story, screenplay and dialogues of the film which surprisingly have very less connection with each other. Because the story is horror at its heart, the screenplay falls into comical space, and the dialogues (also because of the poor dialogue delivery) outshines gibberish.

Jai P Mishra’s editing could’ve been better. Many scenes lack continuity which results in loss of impact. Anas Ali Khan’s cinematography never matches the spooks which are demanded by this genre. There are not any camera tricks to showcase any jump scare.

The acting department is a plethora of below-average performances. I tried really hard to like at least one of the actors, despite keeping expectations to a bare minimum, none of them did even a close to a decent job.

The actress playing Anjali has the meatiest scenes when it comes to displaying the acting chops, but there’s not a single instance in which she excels.