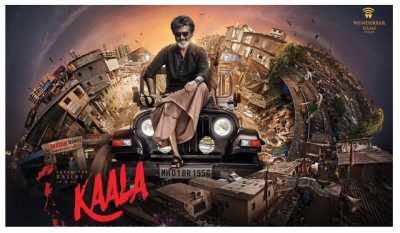 Kaala is a 2018 Indian Tamil-language action drama film written and directed by Pa. Ranjith and produced by Dhanush under his banner Wunderbar Films. Starring Rajinikanth in the lead role, the film was announced in 2016. The film was earlier scheduled to be released on 27 April 2018 but was postponed to June due to the standoff between Nadigar Sangam and Digital Service Providers on the increase of virtual print fee charges along with the 2018 Tamil Nadu protests for Kaveri water sharing issue which also led to the delay in release of other Tamil films. Kaala premiered in Malaysia on 6 June 2018, followed by a release in 1,800 theatres in India on 7 June 2018.