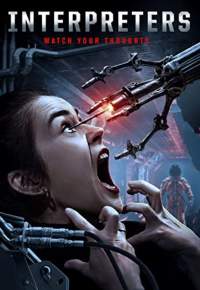 Originally shot beneath the as a substitute unwieldy name Interpreters: a C & Earth Chronicle – quantum 1, Interpreters is a movie that slipped right under my radar. It’s doubly unusual as I frequently get screeners for films from its distributor. However, they seem to have let this slip out with none publicity. Which is a shame because that is one of the first-rate films they’ve launched.

After being set up on a assignment in some foreign desert, corporate merc Mark Frost (Ace Marrero, The Last Heist) comes back home only to get the shaft from his company the C & Earth conglomerate. He decides it’s time to step faraway from that life and buys a residence inside the tiny, populace 891, town of Sullen. His dependancy of deciding to buy things like homes in coins catches the attention of Sheriff Culven (Manny M. Hernandez, The Summoning).

But the sheriff soon has other matters on his thoughts. Like a string of weird murders that seem to involve superior technology. Could they have got something to do with the business enterprise that’s shopping for up all of the neighborhood belongings? Or is Mark’s arrival on the town not a twist of fate, for one purpose or another? Why isn’t Mayor Stetson (Christopher Kriesa, Wind Walkers, Hellraiser: Inferno) overly involved? And simply who is Frost’s partner Reasonor (Erin Stegeman, Fun Size Horror: Volume One) and might she be relied on?