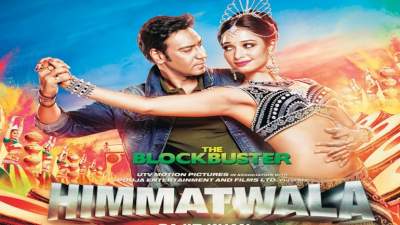 Set in 1983, the story begins with Ravi (Ajay Devgn) winning a fighting competition at a club. He is known as Himmatwala (courageous man). He then goes to Ramnagar village, where he meets his mother, Savitri (Zarina Wahab), and his younger sister, Padma (Leena Jumani), who are living a miserable life.

Ravi’s mother Savitri, tells Ravi that Ravi’s father (Anil Dhawan) was an honest and respected man, and he was the priest of the temple. His father was framed by Sher Singh (Mahesh Manjrekar), the tyrant zamindar (landlord), for robbing the temple since the latter saw him commit a murder. Disgusted, Ravi’s father committed suicide. In revenge, young Ravi tried to kill Sher Singh, but failed. When Ravi’s house is burnt, Savitri tells him to run away as Sher Singh will kill him.

With revenge in his mind, Ravi beats up Narayan Das (Paresh Rawal), Sher Singh’s manager and brother-in-law, as well as threatening Sher Singh. The next day, he publicly humiliates Sher Singh’s daughter, Rekha (Tamannaah), because she was beating up her innocent driver. In response, Rekha unleashes a tiger on the village in front of Ravi. Her plan was unsuccessful, however, as it backfired. Rekha falls down from the terrace and is about to be attacked by the animal, when Ravi jumps and saves her life. Rekha falls in love with Ravi, and afterwards, saves Ravi’s life against her father Sher Singh’s plans.