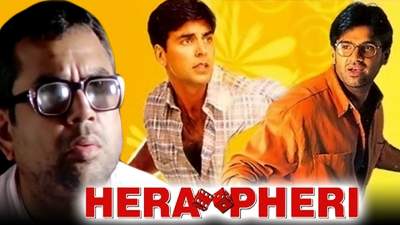 The film begins with Shyam (Suniel Shetty), a guy searching for a job at a bank. He was unable to get the job in spite of his late father who worked there accidentally bumps into a guy named Raju (Akshay Kumar). Shyam mistakes Raju for a pickpocket and begins to chase him. However, he discovers the truth and vice versa occurs with Raju chasing Shyam mistaking him for a pickpocket. Raju has his own troubles, dealing with his daydreams and unfriendly people he is working for. He is unable to keep a job and thus faces many problems.

Shyam then approaches a garage owned by the name of Baburao Ganpatrao Apte and manages to get a room on rent by compromising on the amount for Baburao’s alcohol. Unbeknownst to him, Raju is staying in the same house on rent, which he hasn’t paid for the last two years. The trio falls into hilarious situations that usually involve Raju instigating Shyam and purposefully trying to create a ruckus that Baburao, fondly called as Babu Bhaiyya, has to resolve. During one such fight, a girl named Anuradha (Tabu) arrives and tries to persuade Shyam to sign the Non-Objection Certificate, so that she could have the job at the bank. When Shyam refuses, Raju hatches a plot to make him sign the papers. Shyam eventually finds out that Raju made him sign the papers and that is when the rivalry between the two commences. An old friend of Shyam, Khadak Singh (Om Puri), comes to his place asking to return his money so that he can marry off his sister.

Shyam finds out that Raju has been deceiving his mother by posing as an engineer. Anuradha prepares a job resignation meanwhile and gives it to Shyam, who in return tears it up because of her mentally ailing mother and the poor conditions of her home. Later he confronts Raju who reveals that he wants to see his mother happy.