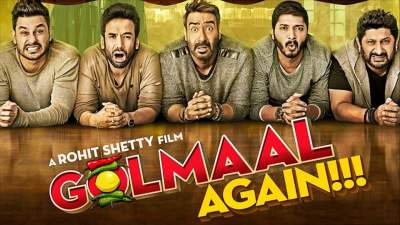 Gopal, Madhav, Lucky, Laxman and Laxman 2 are orphans in an orphanage in Ooty managed through businessman Jamnadas. Gopal is frightened of ghosts, Lucky is mute and Laxman has a speech obstacle. The boys find a toddler female and take her in, naming her Khushi. They care for her and are also aware of librarian Anna’s ability to see ghosts and spirits. One day, whilst Madhav pranks and scares the timid Gopal in an empty bungalow, a combat ensues between the men. Gopal receives punished, which activates Gopal and Laxman to depart the orphanage, and soon, Madhav, Lucky and Laxman additionally do the equal. Khushi is later adopted by means of the loving Colonel Chauhan and his wife.

Some years later, Gopal and Laxman work with Babli Bhai (Sanjay Mishra) and Madhav, Lucky and Laxman paintings with Vasooli Bhai (Mukesh Tiwari). The organization reunites after studying approximately Jamnadas’ demise. Returning to the orphanage after 25 years, they meet Col. Chauhan, Anna and Pappi (Johnny Lever), every other orphan from the orphanage who has frequent reminiscence loss.

They meet a woman who they suppose is the bungalow’s caretaker, Damini (Parineeti Chopra) and find out about Khushi’s dying. At an occasion after Jamnadas’ funeral, businessman Vasu Reddy (Prakash Raj) well-knownshows the orphanage might be demolished and moved elsewhere in plans to make his very own constructing. When the organization leaves the orphanage and returns, a ghost possesses Laxman and talk in Nana Patekar’s voice which scares Gopal.