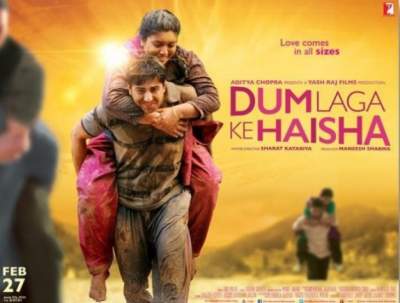 The first thing you should know about ‘Dum Laga Ke Haisha’ is that it has a story. Verily, the thing that movies ought to have before they get made, the very thing that Bollywood forgets, unbelievably, so often. The story is the basis of a solid, honest-to-goodness script, a lead couple that wins you over gradually but surely, and a bunch of actors who know exactly where they are at.

Insecure young fellow Prem Prakash Tiwari (Ayushmann Khurrana) is a perfect candidate for the kind of ‘rapid-speaking’ English coaching classes, the ads which you find plastered on walls in small towns and ‘kasbas’. He’s called ‘Lapoo’: it could well have been ‘Lalloo’, because that’s what Prem comes across as, as he ricochets between his overbearing father (Sanjay Mishra), his annoying ‘shakha pradhaan’, and his pals.

He’s the kind of man-boy who still changes into khaki knickers and does ‘varjish’ by the riverside (the ‘shakha’ bit is an interesting quirk, and adds to the character), and who can still be badgered. That trait leads him to the `mandap’, where he is placed alongside Sandhya (Bhumi Pednekar), who would be called, kindly, ‘healthy’ (pronounced ‘haalthy’). Or, ‘plumpy’ by people who think it is a word. Or, if you are the reluctant husband who is seething at his union with a girl with no ‘soorat’, much worse.