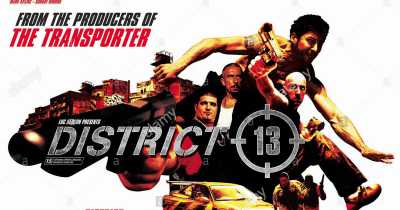 In 2010, social problems have overrun the poorer suburbs of Paris; especially Banlieue 13, commonly referred to as B13: a ghetto with a population of some two million. Unable to control B13, the authorities construct a high wall topped by barbed tape around the entire area, forcing the inhabitants within to survive without education, proper utilities or police protection behind the containment wall. Police checkpoints stop anybody going in or out. Three years later, the district has become overrun with gangs. Leïto (David Belle) is a fighter of such gangs. The beginning of the film depicts Leïto washing a case full of drugs down the drain, then escaping the gang who has come to collect the drugs. The gang’s leader, Taha, kidnaps Leïto’s sister Lola in retaliation; Leïto is able to rescue her and take Taha to the police station, but the police arrest Leïto and let Taha leave with Lola, stating that they’re leaving the district.