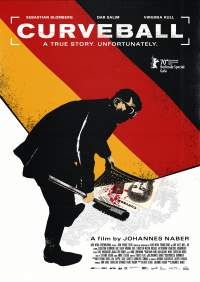 German director Johannes Naber delivers an exaggerated and seldom funny satire of the bungled intelligence reports used to justify the 2003 bombing of Iraq.

Farce is not a genre we commonly associate with the Germans, but then, as “Curveball” reminds us at the outset, this wildly atypical Teutonic satire — which plays like a cross between “Wag the Dog” and “Dr. Strangelove” in its portrayal of incompetence at the highest levels — is “A true story. Unfortunately.” More mea culpa than comedy, assuming/assigning responsibility for the role Germany played in helping George W. Bush settle a score with Saddam Hussein, director Johannes Naber’s nutso sendup of the unreliable intelligence source whose testimony served as the justification for the U.S. to invade Iraq in 2003 has no trouble being outrageous. The challenge comes down to being funny in the process.

A few years back, Matthias Bittner made a very good documentary about Rafid Alwan, code name “Curveball,” called “War of Lies,” and that film takes a grim, serious-minded look at what motivated this former Iraqi chemical engineer to peddle fantasies of weapons of mass destruction to German authorities. In exchange for a European passport, lodging and a modest income, Alwan gave the authorities exactly what they wanted, never imagining that his little fibs would be cited as evidence — the only evidence — needed to bomb the bejesus out of his homeland.