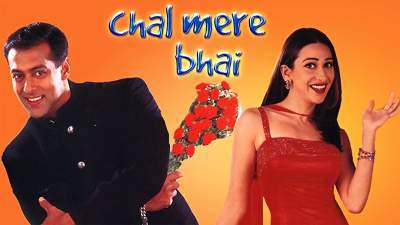 This is the story of two brothers, Vicky (Sanjay Dutt) and Prem Oberoi (Salman Khan) and how their lives are turned upside down by a girl named Sapna (Karishma Kapoor).

Vicky is a business tycoon who runs his family’s huge business empire. Sapna applies for the position of his secretary. She is an orphan who has just moved to Bombay from Pune and is currently living with her uncle and aunt (Himani Shivpuri). Sapna doesn’t have the required experience to be Vicky’s secretary, but Vicky’s father, Balraj Oberoi (Dalip Tahil) is impressed by Sapna’s passion and hires her.

Prem is an aspiring actor, much to the chagrin of Balraj, who would like Prem to also work for the family business. However, Prem’s grandmother (Sushma Seth) and Vicky support Prem’s decision to be an actor. He works with a theater director (Shakti Kapoor) who happens to be Sapna’s uncle.

Sapna is very inefficient at work and Vicky is completely sick of her. But when Vicky is attacked after work, it is Sapna’s fast thinking that saves his life. Vicky’s family invite her and her family to a short vacation on their farmhouse. Vicky’s family become quite fond of Sapna. Prem and Sapna also fall in love during this time.