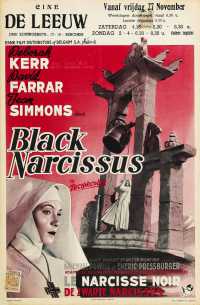 A group of Anglican nuns travel to a remote location in the Himalayas (the Palace of Mopu, near Darjeeling) to set up a school and hospital for the local people. However they find themselves increasingly seduced by the sensuality of their surroundings in a converted seraglio high up in the mountains and by the local British agent, Mr Dean (David Farrar). Clodagh (Deborah Kerr), the Sister Superior, is attempting to forget a failed romance at home in Ireland. Tensions mount as Dean’s laid-back charm makes an impression on Clodagh, but also attracts the mentally unstable Sister Ruth (Kathleen Byron), who becomes pathologically jealous of Clodagh, resulting in a nervous breakdown and a violent climax. In a subplot, ‘the Young General’ (Sabu), heir to the throne of a princely Indian state who has come to the convent for his education, becomes infatuated with Kanchi, a lower caste dancing girl (Jean Simmons).