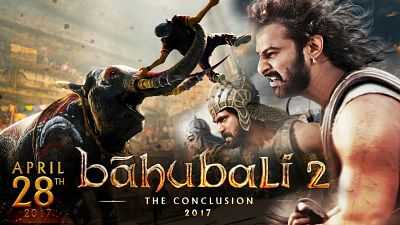 SS Rajamouli’s epic saga Baahubali 2: The Conclusion comes across richer and more fantastic. There is a lot more in this fairytale world — a new city, a moonlit war, cattle with fire in their horns and Disneyesque palatial ships. Baahubali is a delight for all those who enjoy cinema as a visual medium, there is not much else, though.

SS Rajamouli’s biggest budget adventure, Baahubali 2: The Conclusion, comes alive in its colossal and ambitious imagination to complete the unfinished story of Baahubali. It lives and loves in mythical cities that touch the cloud created with awe-inspiring finesse.

Most importantly, why Kattappa killed Baahubali has been answered. The question in itself had the audience, catching an early morning show, on the edges of their seats but the fairytale of a story did have more to offer.

The imaginary city of Mahishmati now comes across richer and more fantastic with a new waterside view. There is a lot more in this fairytale world: A new city where Baahubali meets his future wife Devsena (Anushka Shetty), splendid views of a moonlit war there where cattle with fire in their horns fight the enemy, eagles carry messages and Disneyesque palatial ships that fly. There is an anthem for Mahishmati as well.

Such risk with such extravaganza is that one unconvincing moment fails an entire film. But Baahubali’s cinematography and craft leave no gaps. It is fair to say that it creates a new landmark for Indian cinema in convincing ‘special effects’.

The Conclusion begins seamlessly just where it left in the first movie with Kattappa narrating the story of Mahishmati. The scale rises soon enough as Baahubali enters the screen to tame an elephant gone wild with cheers from the audience as is wont of a superstar.