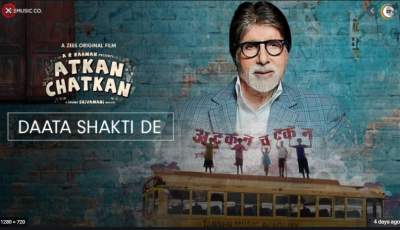 Atkan Chatkan is the rags-to-riches story of Guddu, a gifted child prodigy who has an absent mother and an alcoholic father. He works at a tea stall but lives a life dedicated to the pursuit of music. The opening sequence has him tuning to the sounds of kathha being mixed in a brass pot in a paan shop, wheat being husked, a finger ring tapping on a glass tumbler. He stumbles his way to a motley group of other street kids and they all form a band using paraphernalia of street goods — broken pipes, plastic drums etc. But of course, he has to go through a tough beginning — get really down on his luck, and when everything seemed lost, he is rescued.

Guddu and his band are ‘discovered’ by the principal of the Tansen Sangeet Mahavidyalaya in Jhansi, where the film is set. There is a prestigious music competition on the cards, and the raggedy bunch are roped in to win it for the school. Throw in a talented teacher who has a heart of gold. This happens in the first half of the film, and by now, one can predict the second half. The second half is as tedious, hackneyed and predictable as the first. For how long can we use ‘even poor people are allowed to dream’ trope? All this would have been palatable, if only numerous people had not tried it successfully, many times, years ago.