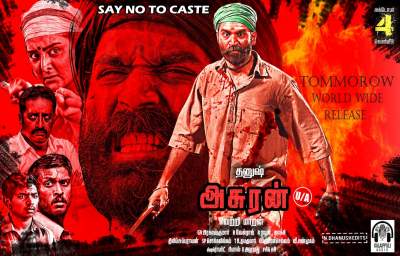 In 1980s Tirunelveli, a man and a boy are trekking across a river, carrying homemade bombs. In another part of the village, a woman, a man, and a young girl are also hiding from the police.

A narrator reveals in a flashback that the man is Sivasaami and the boy is his son Chidambaram, while the woman, man, and child are Sivasaami’s wife Pachaiyamma, her brother Murugesan and daughter Lakshmi. They also had an older son called Velmurugan. They are a family of farmers living in Thekkoor (lit. southern village). Sivasaami has a close relationship with his older son but is distant, almost abusive with Chidambaram. Sivasami’s family, along with most residents of Thekkoor, are Dalits.

Narasimhan is an upper-caste landlord from Vadakoor (lit. northern village), who needs Sivasaami’s 3 acres of land for a factory, to which the family is against selling, especially Velmurugan. One day Pachaiyamma is attacked by one of Narasimhan’s sons, to which Velmurugan retaliates by severely injuring him and his men. He is arrested, and Sivasaami must touch the feet of every male of the landlord’s village to get him released. When Velmurugan hears of his father’s humiliation, he beats Narasimhan with a slipper. In revenge, Narasimhan’s henchmen, led by a hunter Kariyan, behead Velmurugan. Pachaiyamma is broken, and after a year, Chidambaram is compelled to kill Narasimhan in revenge. Sivasami sees the killing, cuts the lights there, tells the family, and flees with Chidambaram. The film switches back to the present.

Kariyan is asked to find the pair, tracks them down, and almost kills Chidambaram. Sivasami defeats them all but kills none. While the two recover, Sivasaami explains why he spared their lives.