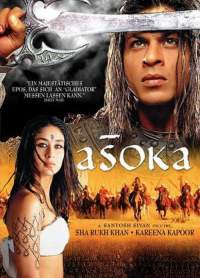 The film chronicles the early part of the life of Emperor Asoka. It begins with his career as a General in Takshashila and ends with the bloody conquest of the Kalinga.

Emperor Chandragupta Maurya, grandfather of Asoka, of the Maurya empire, has decided to embrace Jainism and abdicate the throne of the empire in favour of his son Bindusara. But his grandson, Prince Samrat Asoka, claims his sword. The old emperor explains that this sword is evil and the sword demands blood and destruction.

A few years later, Prince Samrat Asoka (Shah Rukh Khan), now a brave youth, is battling the rebellious chief of Taxila for his Emperor and father. He figures that his elder half-brother Susima Maurya (Ajith Kumar), who also has an eye on the throne of the empire, has deliberately withheld reinforcements from arriving, but defeats the enemy nevertheless. Asoka returns to the capital victorious and confronts Susima. Later, Susima tries to assassinate Asoka while he is bathing. The fight among the princes makes the Emperor unhappy and he orders Empress Dharma (Subhashini Ali) to control her son Asoka. She compels Asoka to temporarily leave the capital to lead the life of a common man. The Prince is disappointed but leaves nonetheless.