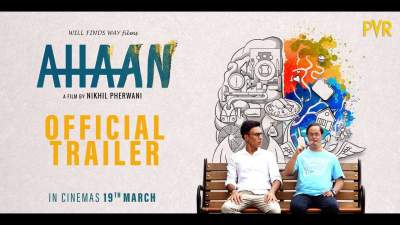 Ahaan (Abuli Mamaji) is 25 years old and like many young men, dreams of a steady job, a nice house, a wife and two children. For now, Ahaan helps his home chef mother (Shilpa Mehta) with her deliveries. His father (Kaizaad Kotwal) is an stroppy man with little affection towards Ahaan, who has Down syndrome.

Among other places, Ahaan delivers his mother’s home-made brownies to Anu (Niharika Singh) and Ozzy (Arif Zakaria). This childless couple is having troubles of their own, stemming mainly from Ozzy’s obsessive-compulsive disorder. Anu sees Ahaan as a sweet boy, while Ozzy is rattled by him. Ahaan’s conduct and attitude often causes those around him – including a cute neighbour (Plabita Borthakur) – to misinterpret his inexperience and guilelessness.

Through the unlikely friendship between Ozzy and Ahaan, writer-director Nikhil Pherwani tells the story of a camaraderie that develops over a shared appreciation for Anu’s cooking. Although Ozzy manipulates Ahaan for his own ends, over time through Ahaan, who takes the world at face value and sees the good in all, Ozzy reconnects with his softer, more paternal side.