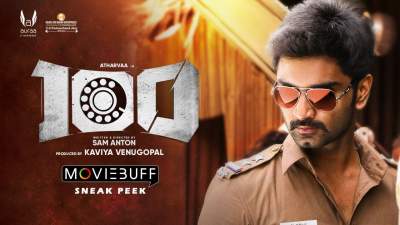 Sathya (Atharvaa) wants to be an upright cop hoping that his life will become adventurous by chasing criminals and solving mysteries like his childhood best friend Anwar. However, contrary to his expectations he gets posted in a control room as an emergency call operator, where he is mentored by ‘Pistol’ Perumal (Radha Ravi). His requests to have his department changed fall on deaf ears. Sathya’s girlfriend Nisha (Hansika Motwani) has a brother Vicky who is shown to be in a relationship with Ayesha, Anwar’s sister.

Initially, Sathya thinks that his job is just as mundane as Nisha’s, who works in a call center. One day, disturbed due to a misunderstanding with Anwar involving Ayesha and Vicky, Sathya misses a call, which turns out to be from the mother of a boy who was kidnapped. Sathya deduces that the boy is being kept hostage in a train, and with Pistol Perumal’s help he manages to nab the kidnappers and get the boy home safely without letting anyone else know.

Pistol Perumal believes that the 100th phonecall changes the operator’s lives, which Sathya refuses to believe until his 100th phone call turns out to be from Sandhya, a girl who was earlier presumed dead. Using his wits, Sathya manages to save Sandhya from the clutches of the kidnappers and hands both the girl and the kidnappers to Anwar to preserve his anonymity. However, the next day he doesn’t find any news pertaining to the girl’s return to her home. Disturbed, he reaches out to Anwar, who refuses to acknowledge that Sathya handed over Sandhya to him.